It may not seem like it, given the recent snowstorms across the country, but winters are getting warmer and those warming temperatures have big impacts on agriculture. Many plants require certain events to take place to cue the stages of their growing cycle. Some pines, for example, can only open their cones and germinate after a low intensity fire. Some plants need migratory birds and insects to pollinate them and trigger fruit production. Other plants, such as maple, need a good cold winter to get them to have an efficient bloom and leaf out come spring.
In California, many orchard crops need a good frost event and cold period to stimulate dormancy in the winter and a good bloom out in the spring. Without a minimum number of frost days, these plants will have inconsistent bloom and fruit ripening times, or may not flower at all.   Pistachios, almonds, walnuts, pomegranates, apricots, plums, peaches and nectarines require a winter chill to produce a good crop the next year. Some, like almonds, only need a short chilling period (about 200 chilling hours or about 20 nights below freezing), and others, like walnuts and peaches, need a substantially longer chilling period (about 700 chilling, or about 70 nights below freezing). 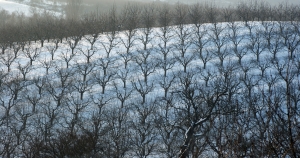 If chilling requirements are met, plants can reset their annual cycles. A shorter chill period can result in irregular crop development and difficulties when it comes to time to harvest.  When the farmer harvests, which is generally only once or twice a year per tree, the fruits or nuts may be in different stages of ripening instead of them all being ripe at once.
Another problem that can arise is reduced pollination in trees that rely on overlap in timing between male and female flowering.  Decreased chill upsets overlap in the blooming of male and female trees. With increased global warming and changing chilling conditions, the phenology of these plants could change significantly, severely impacting crop yields.
California alone has an $8.7 billion industry that relies solely on tree crops.  Decreases in winter chill will have a detrimental impact on this source of revenue.   Most orchards remain in production for decades and are generally planted assuming that the current temperature conditions will remain constant. This has a number of implications. 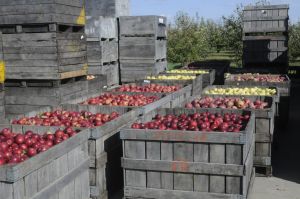 Researchers from the University of California Davis and the University of Washington found that the number of chill hours will likely drop significantly in almost all parts of California, making orchard production difficult.   Using the International Panel on Climate Change (IPCC) predictions based on several emissions scenarios, the research team predicted the loss of chilling hours. Comparing t to 1950 and 2000 data they found that winter chill will decrease by 30-60% by mid century, and may drop by 80% by the end of the century.

The researchers suggest that current growers with young crops can expect decreasing yields as time goes by. The most sensitive crops, or the ones that require the most chilling hours, will be highly affected and may not be able to produce in a future climate.  Any new orchards that go into production assuming a constant climate may not ever have successful crops, as orchards take many years to become productive. By the time these orchards start producing the climate may already be too warm to produce the necessary chilling requirements for those species. Very few crops would be unaffected. In fact, any orchard that requires over 1000 chilling hours is likely struggling now, and acording to the researchers, could be out of production by mid-century. Crops that require about 700 chilling hours may still be able to be cultivated in about half of California by mid century, but that suitable area will likely decrease to about 10% of its current area. The least affected will be cultivators with a requirement of 500 chilling hours or less, with areas with 500 chilling hours being reduced to 78% of their current area.
The study was done using the current method for chilling requirements used by growers, in chilling hours. However, the model used to predict future chilling hours has been found to be increasingly inaccurate the further it predicts into the future. To compensate for this and to verify their results, the scientists compared the Chilling Hours Model with another model that has been shown to be more reliable, the Dynamic Model. This model takes into account more variables than the Chilling Hours Model, including how hot the days get and how long the temperatures stay below freezing each day. The Dynamic Model used showed a less drastic decrease in the number of chilling hours overall, and more variability across the landscape in acordiance with landforms and local weather patterns.   However, both models were used to generate the final results and make them useful for growers.
The researchers point out that growers are going to need to make several changes to adapt to a changing climate. First, current growers are going to have to find ways to compensate for a reduced chilling period. One way to do this is to apply chemicals which can be used to help compensate for adverse chilling conditions. Though this can only compensate for a short deficiency in chilling hours, it has been proven to work if applied at the right time. Unfortunately, a chemical application may make it impossible for organic gr 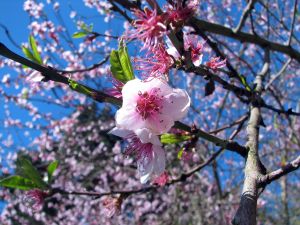 owers to stay organic.
Because the Chilling Model is less reliable as a prediction method the researchers sugest that farmers will need to switch to another method, such as the Dynamic Model method, if they hope to understand how their orchard will need to be managed in the future. Because orchards are such long term crops, an understanding of future management practices is invaluable in understanding future costs and gains. It also is critical knowledge for new orchards, as future conditions will not be the same as current ones.
To further understand the effects that declining winter chill is having and will have on orchard crops, it is important to monitor and observe these changes over time.  The USA National Phenology Network (USA-NPN) is working with scientists, partner organizations and backyard observers to monitor these and other changes across the United States. By monitoring plant and animal cycles we can help farmers, scientists and managers to understand and adapt to our changing climate. To find out more or participate, visit >How to Monitor.