Kodiak brown bears are synced with the salmon red wave 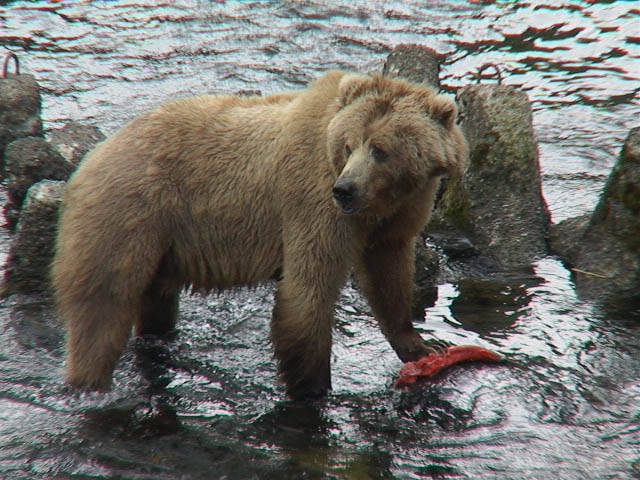 All wild animals face the challenge of finding enough food to survive.  This is especially challenging when they depend on food resources that are variable in abundance, either fluctuating throughout the year or found in certain locations but not others. Kodiak brown bears are an example of a species that has a high dependence on salmon, which can make up half of the diet of adult female bears as they fatten up during the summer season. Migrating and spawning salmon occur in high densities and are easier for bears to catch than in other times of the year. Migrating and spawning activity lasts several months, although individual populations of salmon are scattered across the landscape and each population will only spawn for a few weeks.

Researchers from the University of Montana, University of Wyoming, and US Fish and Wildlife Service investigated how well Kodiak brown bears track spawning salmon. First, they quantified the salmon ‘red wave’, determining where and when salmon were present. Next, they tracked movements of 40 bears that were fitted with GPS collars and counted how many days they stayed in locations with salmon. Lastly, they measured whether bears that surfed the red wave by moving between individual salmon populations had more days with access to salmon. They found that bears were 50 times more likely to be detected at streams where salmon were spawning than at streams where they were not spawning, following the salmon as they moved through their spawning grounds. Bears that traveled to more locations with salmon had more days of access to salmon than bears that did not move or went to fewer locations.

While many examples of animals tracking resource waves are known, how well they track these resources is unclear. This study provides valuable information about both bear movements and the moving salmon resource, allowing these authors to measure the degree to which the bears take advantage of the resource.

The link between bears, salmon, and their habitat has cultural, commercial, and ecological implications. Salmon breeding phenology is affected by a delicate balance of fresh water temperatures and the topography of the landscape and waterways. The diversity in the timing of spawning among salmon populations, where individual populations vary across space and in time, ensures their numbers. Unfortunately, this balance is already threatened by habitat fragmentation that disrupts migration routes, and hatchery stocks that promote low diversity of spawning phenology.

If there is a loss in this diversity, and populations become similar in the timing of their spawning, it is estimated that fisheries closures would be ten times more frequent, making it more difficult and expensive for you to buy salmon. And the bears? They could be faced with half the time to eat salmon than they have now, resulting in increased competition for food and decreased bear populations.