Home » Roots, as well as leaves, are affected by shifting temperatures

Roots, as well as leaves, are affected by shifting temperatures 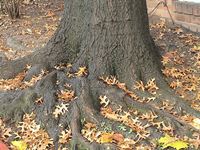 Plants rely on their roots for delivery of water and nutrients, not to mention for the structure that anchors them to the earth. Just as new leaves or needles grow in the springtime, roots also have a period of growth, or production. To better understand the relationship between leaf and root production, the authors of this study evaluated patterns in the timing of leaf and root phenology in deciduous and coniferous trees. They found that the timing of the production of roots and leaves are not tightly linked in a particular plant species. In many species, the production of roots happens well before leaves break their buds.

The research team at Penn State behind this study used USA-NPN protocols to record their observations, and submitted their data to Nature’s Notebook.  The data submitted to the National Phenology Database continue to be of great use to scientists and researchers who are making new advancements in their fields.