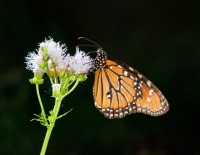 In a nutshell
Certain species have life histories whose timing is coordinated with other species, a partnership in which both individuals benefit. We call this mutualism. If the timing of these life cycle events shifts for one species but not the other, the result is a phenological mismatch: partner species are no longer in the same place doing certain things at the same time.

The authors conducted a literature survey to determine the characteristics of mutualistic species that make them most at risk of mismatch. They found three main characteristics:

1. The partners have difficulty finding each other, due to life histories that are not in sync. For example, migrating hummingbirds from southern Mexico are becoming mismatched with floral resources in the Rocky Mountains.

2. The partners' interaction is short in duration, making a narrowing window of time less likely to allow interactions to take place. For example, short-lived spring wildflowers and the bumble bees that pollinate them have a small window of time in which they are present together.

2. The species are not entirely dependent on each other for survival. For example, for plants in the Midwest showing advance in flowering, the species with the most generalized pollinators see the most reduced amount of pollination visits.

What is special about this study?
Most scientific studies that have looked at mismatch have focused solely on relationships between plants and their pollinators – the birds, bees, bats, butterflies, moths, beetles, or other animals that move pollen within flowers or from one flower to another. This study takes a step back, and instead of looking at the impact of mismatches, looks at the causes. The authors determine what it is about mutualistic partnerships that make them more likely to experience mismatch.

What does this mean for YOU?
Though they are for the most part invisible to us, mutualistic relationships play a key role in our lives – to get the nutrients they need, almost half of land plants rely on partnerships with fungi that live in their roots. Additionally, pollinators such as birds, bats, and bees affect over a third of the world’s crop production.

The authors predict that among the species most likely to be at risk of mismatch are migratory species, which could affect the pollination of flowering plants, including crops. Also at risk are species at northern latitudes that have a smaller window of time for their interactions, species that are already facing threats from increasing temperatures. Lastly, both generalist species (that have less strong selection pressure to be in sync) and specialist species (those less able to compensate for the loss of interactions with their partner species) are at risk, which will likely impact crop production, flowering plants, pest control, and more.