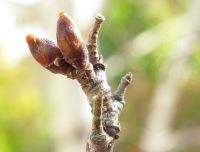 In a nutshell:
This study took twigs from 36 different species and grew them in a chamber under various light and temperature conditions. While longer day length advanced budburst to a small degree, the length of chilling had a much larger effect. Effects of chilling were most pronounced for late successional species -- species that colonize the landscape after other plants have become established. Given expected warming temperatures globally, the results of this study suggest that forests might be more impacted than previously assumed, with pioneer or invasive species benefiting more than native and late successional species.

What is special about this study?
The onset of phonological events in temperate systems, for example, when leaf buds first break or flowers open, are thought to be triggered by spring temperature, winter temperature, spring day length, or a combination of these factors. Lack of chilling in winter can delay the start of phenological events, though these changes are small in comparison to the advance of onset due to warmer springs. However, overall delays in onset have been recorded for some species and ecosystems.

Previous studies have tried to disentangle the importance of chilling and photoperiod on spring phenology, but were limited in the number and variety of species they studied. This study used 36 species of woody plants, including those that colonize first or after other plants have become established, as well as those with origins from oceanic to continental, and native, ornamental, and invasive species.

This study also shows a greater impact of climate change on forest systems than was previously thought because of the change in order of species’ budburst. Lastly, this study was the first to compare twig cuttings to their donor trees throughout the growing season, and found the cuttings to be a useful substitute for the donor trees.

What does this mean for YOU?
Increasing winter temperatures could cause a delay in the onset of budburst, as well as a change in the order of when species undergo budburst. This means that in a warmer world, we could see pioneer and invasive species having an even higher advantage, which could result in decreased biodiversity and a more uniform landscape.