Spring of 2012 was the earliest on record in North America 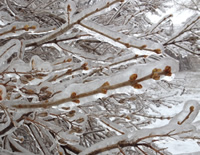 The spring of 2012 broke many records across the eastern portion of the U.S. for early warm temperatures. Though we humans may celebrate the early return to warm temperatures following a cold, dark winter, plants and animals may not fare as well. In the Southeast, a destructive insect known as a plataspid rapidly munched its way through soy crops across several states following the early spring. Similarly, mountain pine beetles hatched so early that in many places the insects were able to mate a second time, resulting in many more baby beetles. The famed Cherry Blossom Festival in Washington, DC was affected as well. As a consequence of the irregular spring season, flowers peaked and quickly declined, and festival attendees with few blossoms to enjoy.

Further, in many locations, these early springs turned out to be “false springs,” when the uncharacteristically early warmth was followed by damaging frosts. The implications of this sequence of events can be ruinous for plants – tender leaf and flower buds stand little chance against ice storms. Across the Midwest, fruit crops were devastated; only 10% of Michigan’s apples survived late-April frosts. Further, the early jump on spring was followed by mid-summer drought in much of the Midwest, resulting in a truncated growing season.

What if it were possible to predict this sequence of events, or evaluate the severity of these extreme events, as they unfolded? A team of scientists affiliated with the USA-NPN are working on ways to do this. Using weather station data, this team has established relationships between accumulated spring-season warmth and leaf-out and flowering in plants nationwide. These relationships, known as the Spring Indices, can be used to assess the timing of spring across the nation for the current year as well as years past. Using the Spring Indices, the team demonstrated that 2012 was the earliest spring over the continental U.S. on record – greater than 100 years. This team will continue to develop the Spring Index indicators, as they show promise for tracking climate change and its impacts.