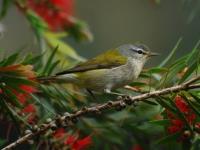 Due to early warm temperatures, mean flowering date advanced by 19 days in 2012, and peak flowering period by nearly 30 days. However, timing of warbler migration did not advance resulting in a >25% decrease in overlap (orange polygons). There was also a >12% decrease in the percent of observers recording warblers in 2012 (height of green lines).Advanced phenology along migration routes could provide important cues about northern breeding grounds. Migrants may limit stopover, pushing north to optimize their arrival time, thus limiting detections by birders.