The challenge of teeny tiny flowers

Flower types vary nearly endlessly—their sizes, shapes, and colors. Some are so tiny or green or bland-colored that they are often described as being "inconspicuous"—almost impossible to see without a closer look, or magnification. Often, very tiny flowers are clustered into larger displays (inflorescences), making their display a bit more conspicuous to both humans and pollinators.

Observing which growth stage (phenophase) they are in might prove to be difficult, especially if it is your first season as a Nature’s Notebook observer. In these notes, we will focus on some examples of flowers that are nearly impossible to see in species having clustered displays (inflorescences) and those having tiny single flowers scattered along their branches. We will briefly revisit how to understand whether the flower is "open" or spent (no longer active and/or drying).

What is a catkin anyway?

One type of very tiny and inconspicuous flower belongs to many species in which the flowers are often tightly clustered into a finger-like inflorescence called a catkin (or ament). Catkins are quite common in wind-pollinated species, but also can occur in insect-pollinated species. Often the wind-pollinated species have "male" catkins and "female" catkins—clusters of single sex flowers sometimes on the same plant (monoecious) and sometimes on separate plants (dioecious). Insect-pollinated species with catkins can have single sex flowers or perfect flowers (those having both male and female parts in one tiny flower). It isn’t uncommon in catkins having inconspicuous flowers to be petal-less or sepal-less, and instead having a tiny, leafy bract.

A few of the more familiar species having catkins are alders (Alnus), ashes (Fraxinus), birches (Betula), elms (Ulmus), oaks (Quercus), willows (Salix), cottonwoods (Populus), acacias (Acacia), and mesquites (Prosopis). Other types of tiny, inconspicuous and clustered flowers that are not catkins but, instead, other types of inflorescences, occur in plants like maples (Acer—with more loosely arranged flowers) and sycamore (Platanus—with tightly clustered globes of flowers). Yet when an observer takes some time and a closer look at the flowers of their species to understand their unusual form—it then becomes much easier to determine the stage of development for an observation. Once an observer develops some experience in looking at the flowers of these species, making observations is easier, and it may also become easier to understand other species with difficult to understand flowers. 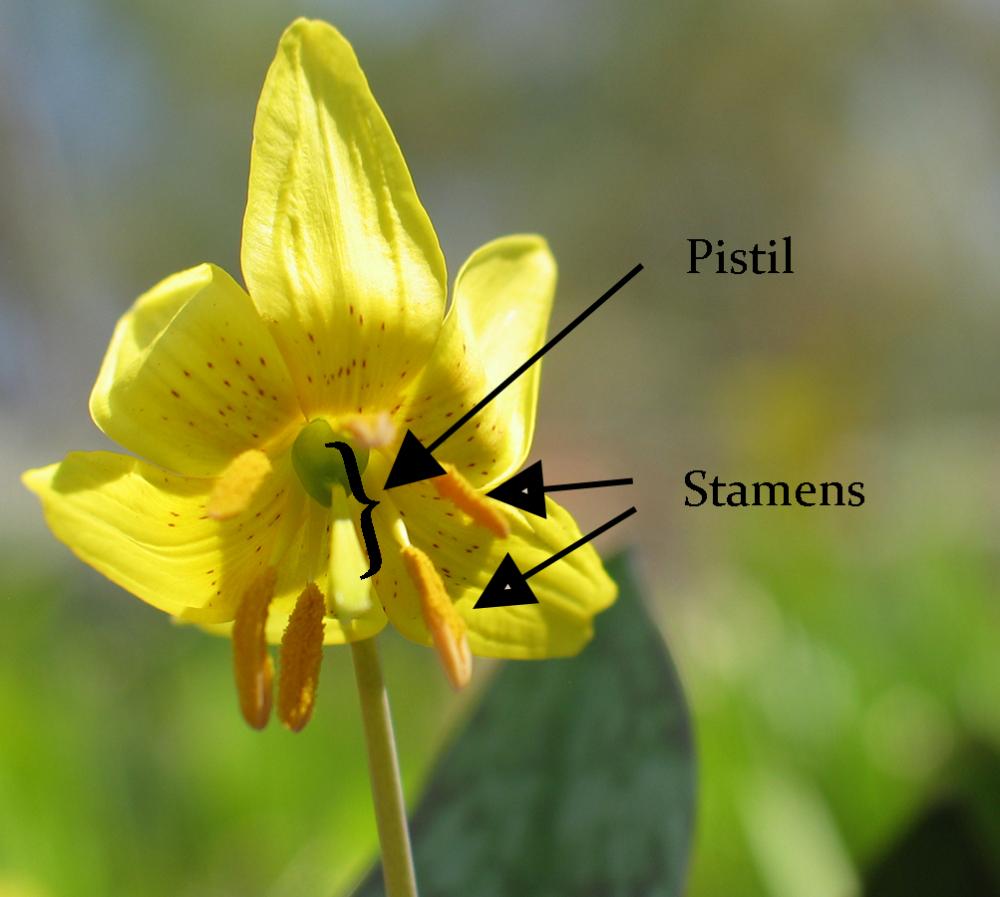 So let’s take a quick look at a typical flower, a large one that is easy to see...and that has both male and female flower parts:

The Nature’s Notebook definition for an open flower is: "Flowers are considered "open" when the reproductive parts (male stamens or female pistils) are visible between or within unfolded or open flower parts (petals, floral tubes or sepals). Do not include wilted or dried flowers."

Species having tiny and inconspicuous flowers will still consistently have these female and/or male flower parts:

Male flowers or male flower parts—no matter what their size, outward design and decorations are—will always have stamens with anthers that open to release pollen. The male flowers may or may not have bracts, sepals, petals or other decoration, but they always have anthers. Keep in mind that anthers can have very different and unusual shapes and sizes, so take time to get to know your species’ characteristics for these flower parts. Read more in our Botany Primer »

Female flowers or female flower parts—no matter their size, outward design and decoration—will always have a pistil consisting of at least one stigma, style (long or nearly non-existent), and ovary. Keep in mind that pistils (stigmas, styles, ovaries) can have very different and unusual shapes, sizes, and orientations, so take time to get to know your species’ characteristics for these flower parts.

Let’s look at a species having inconspicuous flowers in catkins. We will look at the female flowers (this one is a female willow catkin), and let’s look at it through its development, just to have a bit of reference to compare its various growth stages. (Keep in mind that all photos are not at the same scale. Click to enlarge photos.)

A close, careful look reveals the differences between their phases, although these changes are hard to see when first trying to understand these tiny flowers. The fresh stigmas have a yellowish color in this species— 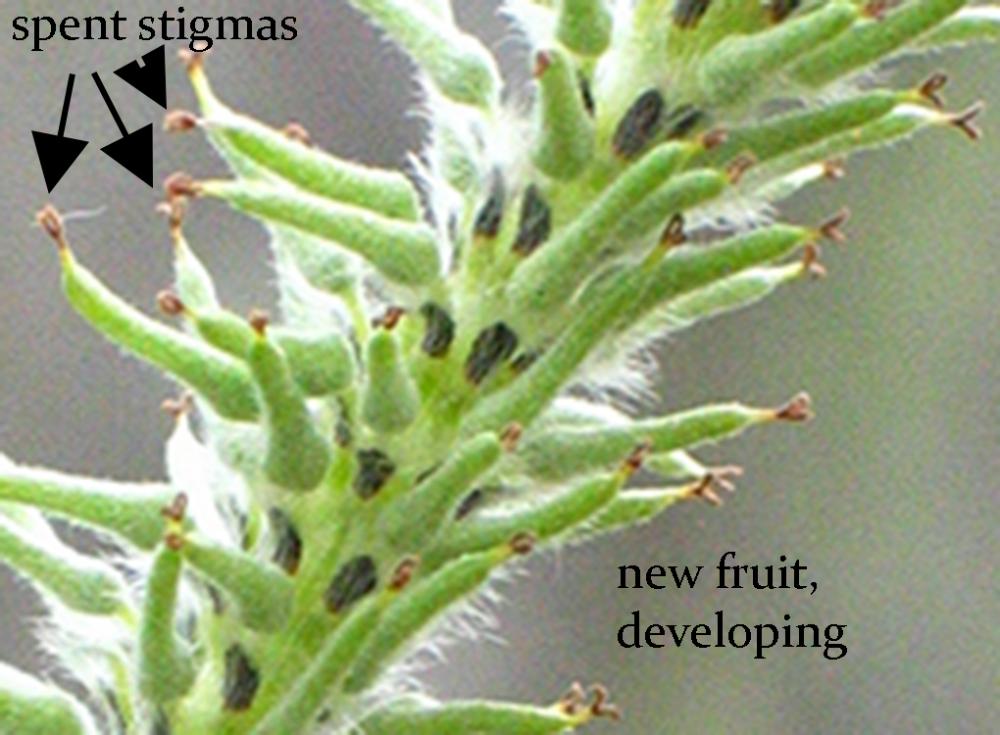 remember, each species will have different characteristics—indicating the female flowers is "open" and receptive to pollen. A dried stigma begins to brown and indicates that the flower has passed by its "open" phase and is spent. It may have been pollinated and fertilized, but that won’t be evident immediately. Over time, an experienced observer will come to detect the subtle cues while looking closely, and soon be able to apply those cues while observing the catkin from a distance. Binoculars might make the task of determining the phenophase easier in tall plants and/or those who have their flowers above an observer’s eye level.

Let’s take a look at male catkins, this time from an alder tree—the catkins having only anthers: again, let’s look at it through its whole development, just to have a bit of reference to compare its various growth stages. When the male flowers have released all of their pollen, the tiny flowers begin to dry up and turn brown, usually. (Keep in mind that all photos are not at the same scale. Click to enlarge photos.)

For comparison, a catkin of an insect-pollinated mesquite tree, having both male and female parts in each flower. (Click to enlarge photos.)

How do I count all those teeny tiny flowers?

When making observations for Nature’s Notebook on plants that have tiny, inconspicuous flowers tightly clustered into catkins or other inflorescence types, the observations sometimes center on a whole inflorescence versus individual flowers. Therefore, when estimating counts of for the "Flowers or flower buds" phenophase, an observer would count the number of clusters having flowers either in an expanding bud or open stage, not the individual flowers within the cluster or inflorescence.

The flower’s characteristics for the species will define how an observer estimates the numbers for the "Flowers or flower buds" phenophase. If the flowers occur in a cluster or inflorescence, like a catkin, Nature’s Notebook has some special instructions, that is: "For species in which individual flowers are clustered in flower heads, spikes or catkins (inflorescences), simply estimate the number of flower heads, spikes or catkins and not the number of individual flowers." Which means, once you understand what a flower bud or an open flower looks like in the catkin on your plant, you will estimate the number of catkins or inflorescences with expanding flower buds or open flowers instead of estimating all the individual tiny flowers or flower buds within the inflorescence on the plant. Yet, if the tiny, inconspicuous flowers occur singly on the plant with no obvious clustering, then estimations of count will require an estimation of each single flower and flower bud. Once an observer’s eyes get used to how these hard-to-see flowers look in their stages, a quick glance at the plant will enhance their estimations.

A few words of encouragement...

If you have hesitated to take on the challenge of observing phenophases and recording observations for a plant having inconspicuous, tiny and difficult flowers for Nature’s Notebook, hopefully these notes have helped break down some of the challenges that an observer might come across regarding its flower phases. Simply take it a step at a time by watching your plant for a while, examine it closely at regular intervals to sort out what it is doing and the phases it goes through, maybe even do a bit of reading about the species and take some photos for comparison, and get familiar with what it looks like while progressing through its different phenophases. And... Enjoy!

Want to test your new knowledge?

Here are some other examples of difficult to interpret flowers. Take a look at these examples of tiny, inconspicuous flowers and see if you can figure out what phase they are in. Even though you may not know immediately what you are looking at, just being introduced to these unique flowers may help familiarize you for interpreting difficult flowers in the future...(Answers below. Click to enlarge photos.)

Desert hackberry: a) flower buds expanding, b) male flowers open to release pollen, c) female flowers open with the flower on the right also having open anthers. This is a species that can have pistillate flowers (only female) or perfect flowers