Invasive shrubs are becoming increasingly common in eastern forests. These shrubs are top competitors for native shrubs - they can break bud earlier in the spring and hold onto leaves longer in the fall. This phenomenon is called Extended Leaf Phenology (ELP), and allows these early-leafing invaders to take advantage of the greater amount of light reaching the forest floor in early spring.

ELP of these shrubs can create shading on the forest floor at times when native herbs, tree seedlings, insects, reptiles and more depend on that greater sunlight.

Shady Invaders was a project created by researchers at Penn State University to explore the timing of leaves on invasive and native shrubs. The goal of the project was to start to quantify ELP on a regional scale so that we can understand how or if increased shading is actually impacting deciduous forest ecosystems.

We have ended the phenology observation phase of the Shady Invaders campaign. However, we still encourage observations of these species in Nature's Notebook!

See what we learned from this campaign

Learn more about what defines an invasive species

The campaign included observations on the following invasive species:

And the following native species:

Results from the Shady Invaders Campaign

See published results from this campaign. 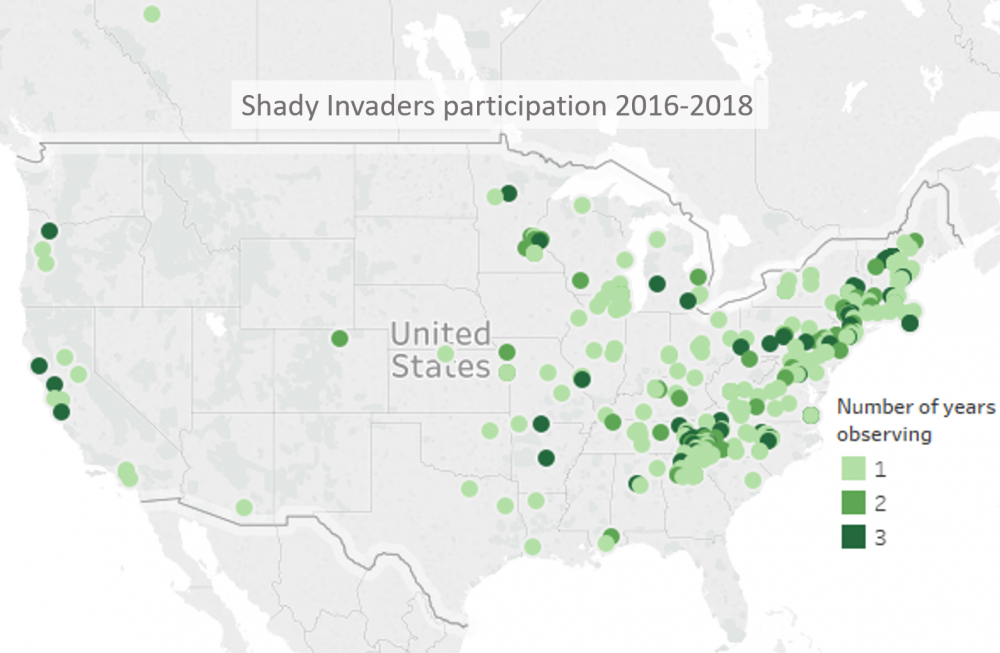 The year with the highest number of observers was 2017, with 417 observers, followed by 2018 with 388 observers reporting. All 878 observers submitted a total of 375,635 observations over the course of the campaign. 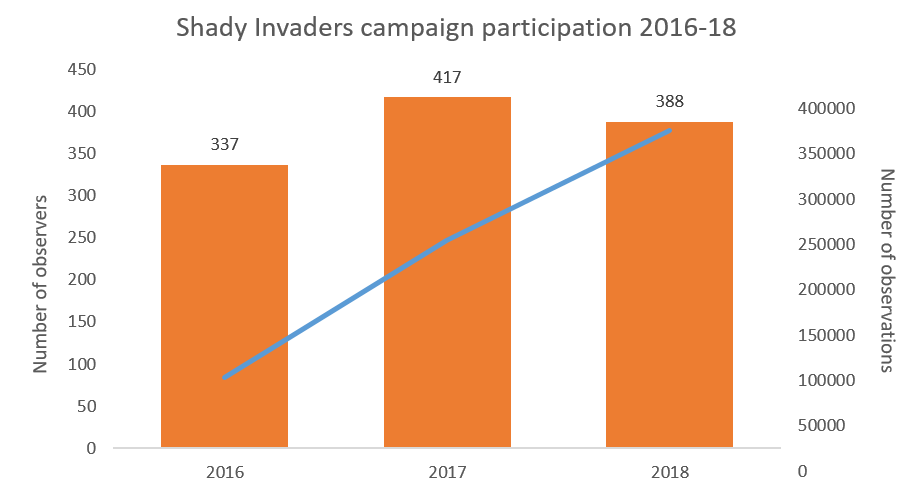 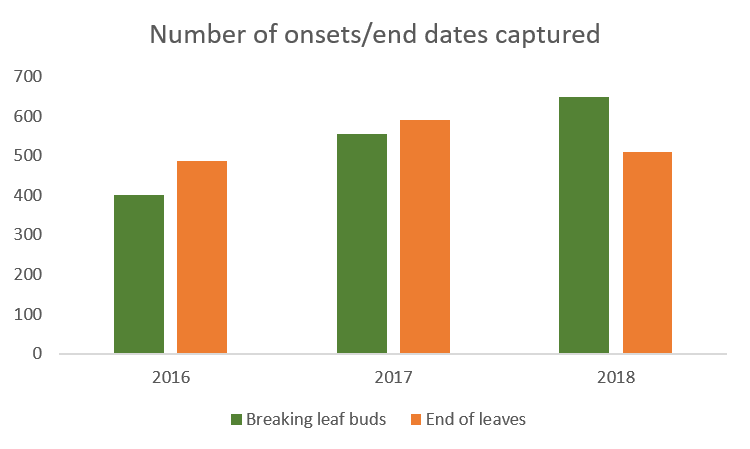 Researcher Erynn Maynard analyzed your data to answer the question of whether invasive shrubs have Extended Leaf Phenology, and what environmental variables contribute to the difference. 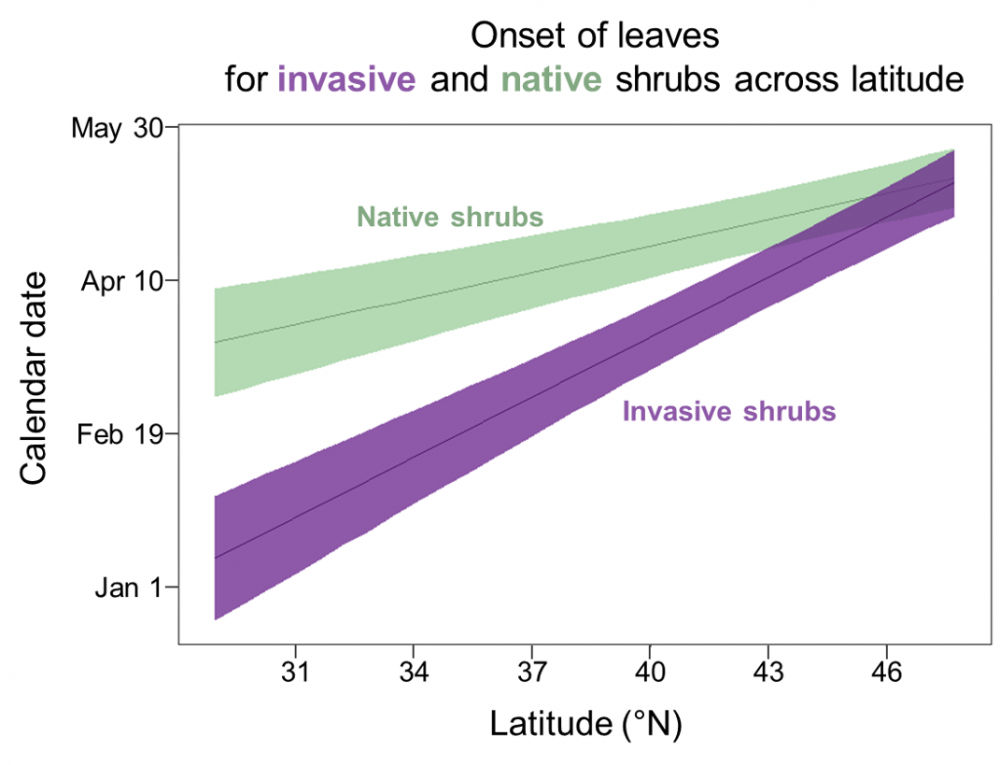 Figure: Relationships and 95% credible intervals (shaded regions around lines) showing fit between onset date and latitude. The model's R squared is 0.74, meaning that 74% of the variation in the data is explained by the model.

To look at the differences between species, Erynn estimated the onset of leaves by species for the mean latitude of the dataset.The species follow the pattern of invasive species leafing out earlier than native shrubs, with the exception of burningbush. Why is this species different? Burningbush has green branches, which may mean that this species doesn't need leaves to take photosynthetic advantage of extra sun in the spring. 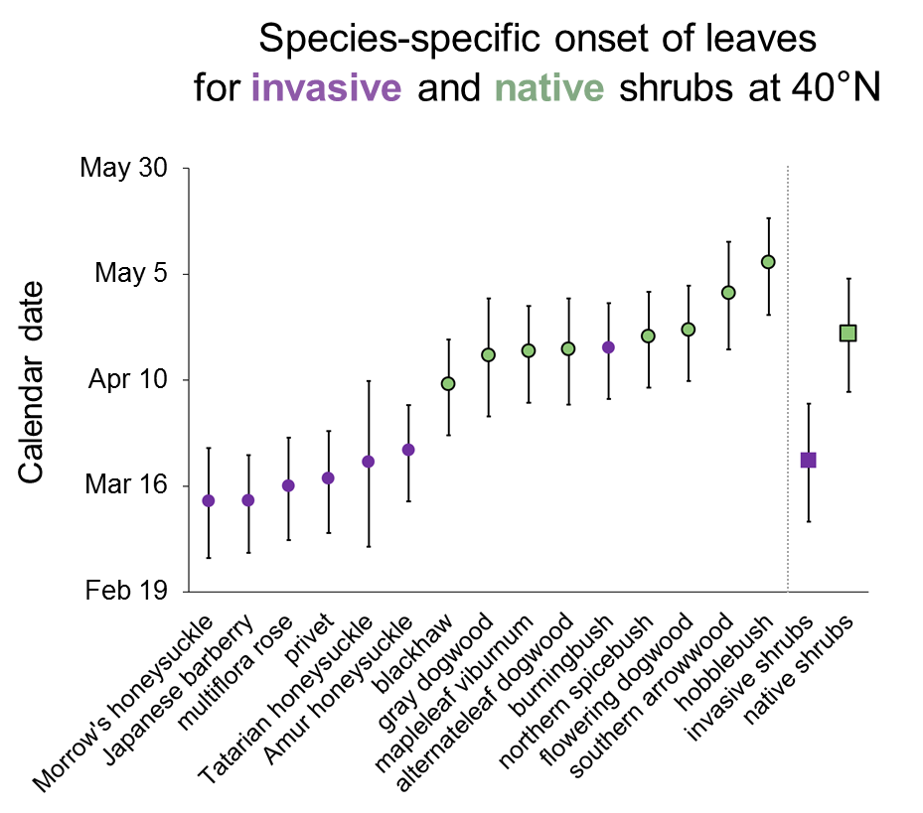 Figure: Modeled onset of leaves by species for the mean latitude of the dataset, 40 degrees N. Mean onset for invasive and native shrubs is also shown on the right.

Erynn also looked at which environmental variables have the most impact on shrubs, and found that both native and invasive shrubs have an earlier onset of leaves with warmer average spring temperatures. Invasive shrubs also respond to warmer bud chilling days, greater spring precipitation, and higher elevation. 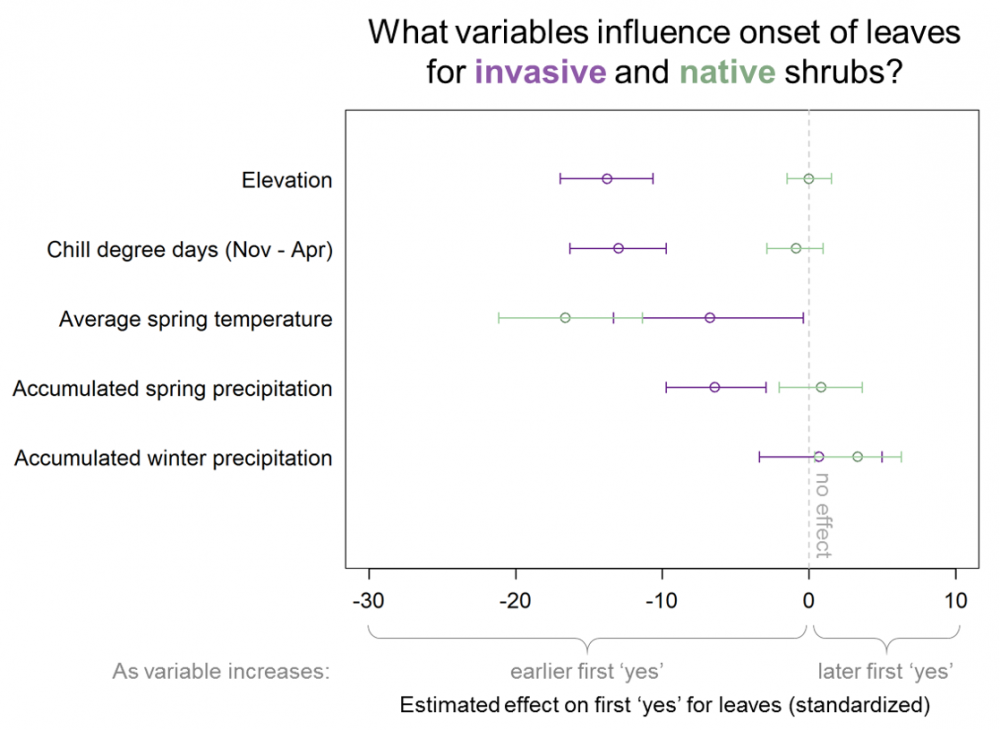 While data on fall phenology are still coming in, Erynn has done some preliminary summaries of your data on end of the leaves phenophase, fall color, and falling leaves. Invasive shrubs have later average dates for all three phenophases, showing they hold onto their leaves longer than native shrubs. 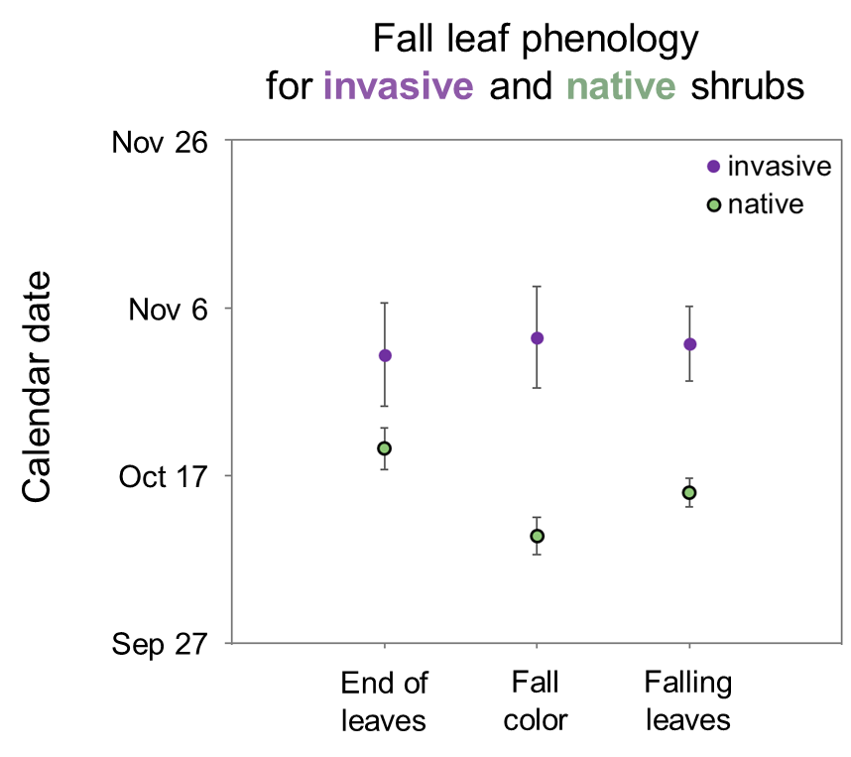 What makes a species invasive?

While invasive species are generally the unintentional product of increased global transportation, many invasive plants continue to be intentionally introduced. Invasive shrubs are an increasingly prevalent component of eastern forests. (Shrubs are generally defined as woody plants with multiple stems arising at or near the ground and are generally shorter and have smaller stem diameters than trees.) Studies estimate that 82% of the 235 invasive woody species in the United States, and 62% of invasive woody species globally were introduced intentionally for horticultural purposes.

Watch a short video on the importance of the Shady Invaders campaign:

In this webinar, Erynn Maynard, researcher at Penn State University, explains why your observations of invasive and native shrubs are important, and gives you tips and tricks on identifying these species and their phenophases. Recorded on March 17, 2016 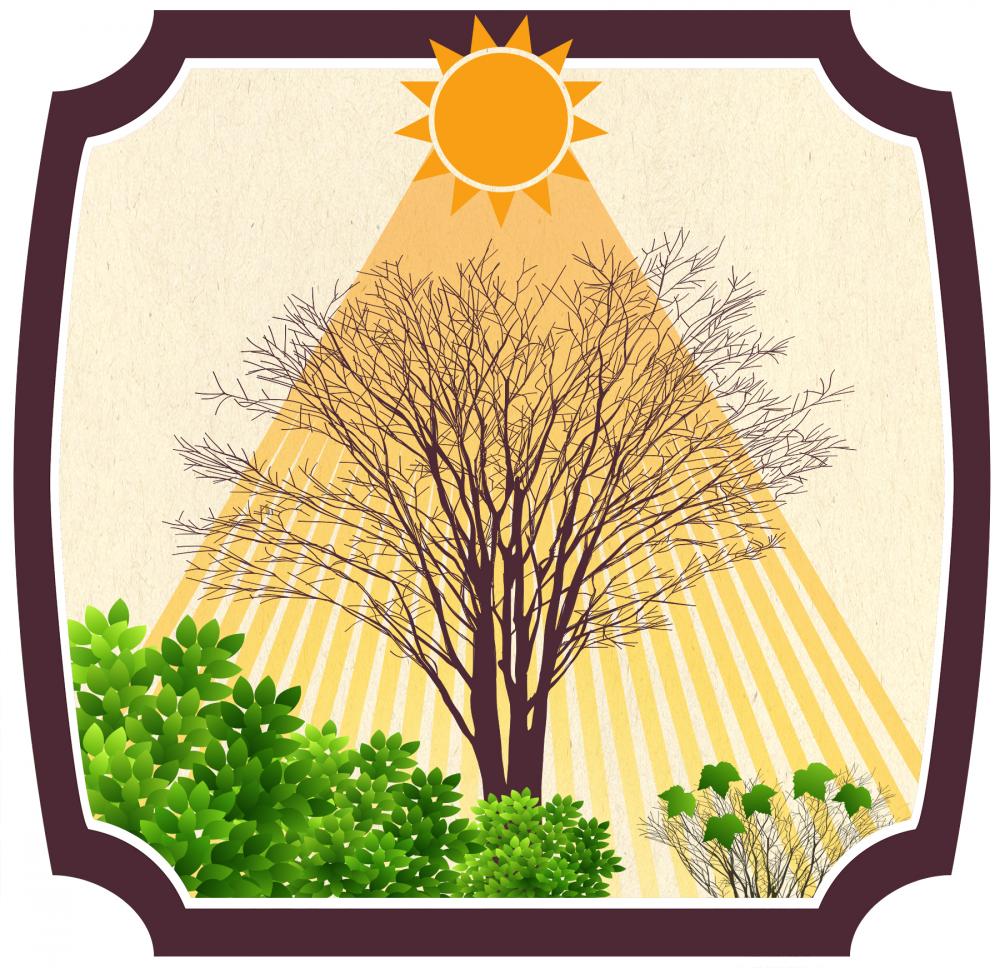 You can earn this badge by observing one target Shady Invaders species in six separate weeks, within the same year. See it on your Observation Deck.